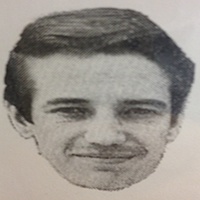 Right Back/Centre Half. Educated at Slough Technical School and brother of Alan Wilks who played League football for QPR and Gillingham between 1966 and 1975.

John joined the Rebels just before Christmas 1962 after promising seasons in school, youth and District League football-the latter with Rainbow. This tall, angular, versatile defender enjoyed an extended run at centre half in the first team in the second half of 1963/4 but subsequently lost that berth to John Delaney.

Stayed loyal to the club and, after filling-in in a number of positions, re-established himself as the regular right back in November 1966.

Always very popular with fans for his hard tackling, all-action approach, so much so that he became known as “Chopper Wilks” on the terraces.

He began playing competitive football while at Burnham Church of England School and during his schooldays played for the Slough representative sides at all age groups.

Was greatly missed when he left in December 1967 to work in Zambia where he went to work as an analyst with a famous copper mine. On his return to this country he enjoyed a long career with Hayes and Wokingham Town.

Played cricket for Rainbox in the summer months, but with football and college studies he has little time left for other hobbies. In what little time he has to spare he enjoys watching brother Alan score goals for Queens Park Rangers.