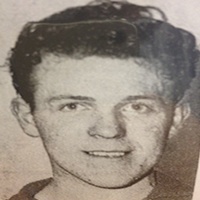 Right Back. Former Slough Technical School pupil who initially broke into senior football in early 1962 as a pacy right back with Maidenhead United and who subsequently competed for that position with former Slough favourite, Brian Lucas.

Joined Slough in December 1964 but never established himself as a first team regular and returned to Maidenhead the next year.

Being understudy to a player like John Ford means that Micky's first team appearances are limited, but he has had two senior outings since joining the Rebels from Maidenhead.

He played at Harlow in a league match last month and again against Chesham on Saturday in the Berks and Bucks Benevolent Cup. On both occasions he impressed greatly with his hard tackling and speedy covering.

Micky joined Maidenhead while still at school as a 15 year-old, having played alongside a number of other present Rebels in the Slough and District Schools X1, County Grammar Schools Xi and county junior and youth sides. He was a pupil at Slough Technical School.

He has always been a full-back and had several spells at Maidenhead as a first-team regular. He had been out of the Magpies first team only three weeks when he moved to Slough last year.
As a youngster he was a member of the Windsor and Eton Athletic Club, and later the Maidenhead A.C. being a 220-yard man and long jumper. It was at that time he had an international schools trial at Gillingham.

He was on Reading’s books as an amateur – “but I have no ambitions to be a professional footballer” he says.