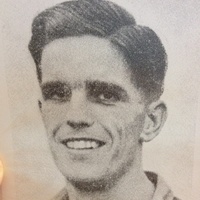 Born at Langley in 1924 Reg has been keen on the game since his early youth, playing as a boy in the team representing the "Slough and District School boys". At the age of 15 years, together with Percy Marshall, he was a member of the Lascelles Juniors when they won the Minor League.

Joining the Royal Navy in 1942, he was posted to Northern Ireland and whilst there was selected to play in the Royal Navy Team against the Army. He was transferred to the Army in 1945 and was demobbed in 1947, and for two seasons was a regular member of the Centre Football Club.

Migrating to Langley F.C. in 1949 he was a member of the team that finished Champions of the .Junior League. Towards the latter end of the 1950/51 season, he became a member of Slough Town.

He was in the Reserve Eleven that won the Reading Senior Cup that season, and again in season 1951/52, and also in the successful side that won the championship of the Corinthian League Reserve Section.

He counts among his medals, two Championships Minor and Corinthian League Reserves and two Reading Senior Cup medals in 1950/51 and 1951/52.

He is a grand Clubman, and can always be relied upon to give of his best. Married with one son, Dennis, who is a staunch follower of the Town