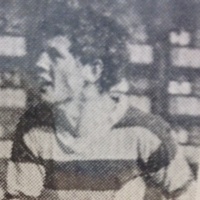 Tony Broadbridge is one of the four ex-Pathfinders who is playing regularly in the Slough Town Reserves side-and like the others he is continuing the promise he showed with the boys' club.

A former pupil of the Slough Technical High School, Tony represented the District Schools XI at soccer and cricket, and then played for the county cricket schools side.

When he finished with schools football he joined Pathfinders and led their youth team attack with tremendous success for a couple of seasons. He was a member of the team in the 1962-63 season that swept all before them, winning everything they entered.
Unfortunately Tony has had more than his fair share of illness and injuries. He missed half of last season with a rheumatic ankle and joined the Rebels when he was fit again, playing a few games with the Reserves.

This season he has missed very few matches and has fitted in well in an attack that blends youth with experience So far he has scored eight goals - including a hat-trick.
Although he prefers centre-forward Tony has played on the wing this season, and in one match he even played in goal! He is not the most orthodox of goalkeepers, but he showed that he can stop goals as well as score them. Such is Tony's enthusiasm for the game he turns out regularly in the Maidenhead Sunday League for the premier league leaders White Horse F.C.

Tony was a printer with a local firm.