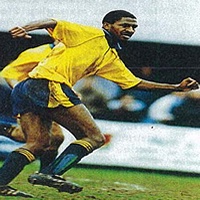 Midfielder who joined the club on loan from Wimbledon during the 1992/3 season.

Scored on his second appearance for the club against Farnborough Town, which turned out to be his only goal for the club.

Fairweather began his career in Non-League football with Dulwich Hamlet, Bromley and Tooting & Mitcham United where his performances attracted the attentions of Wimbledon.

He signed for the Dons in 1984 and made his debut on New Years Day 1985 against Oldham Athletic. Early in his career at the club he had loan spells at Porin Pallotoverit and Koparit in Finland before establishing himself as a regular in the Wimbledon side. He went on to make 138 league appearances for the club, scoring 26 goals as they established themselves as a First Division club and being founders members of the new FA Premier League in 1992. His best season was the 1986-87 campaign, where he played 23 times in the league and scored eight goals in their first campaign as a First Division club, finishing an impressive sixth and actually leading the table in early September. The highlight of Wimbledon's remarkable success story came at the end of the 1987-88 when they reached the FA Cup final and achieved a shock 1-0 win over Liverpool. However, a broken leg meant that Fairweather was not in the squad for that game, although he did appear 21 times in the league prior to his injury and scored four goals to help achieve a seventh place finish. By the end of his time at Wimbledon, he had become the club's "forgotten man", failing to make a single league appearance in his final season and played just 11 times collectively in the two seasons before that.

He signed for Carlisle United in 1993 after falling out of favour at Wimbledon. He left Carlisle after only 12 league appearances (1 goal) to transfer to Golden F.C.. He moved to American soccer in 1996 with New York Fever, before going on to represent Greek Americans Soccer Club and Connecticut Wolves.
Subsequent career

After retirement Fairweather took up a position as a community coach with Sunderland A.F.C. and has coached as part of the US Olympic Development Programme. He has also played for the "masters" team representing AFC Wimbledon.