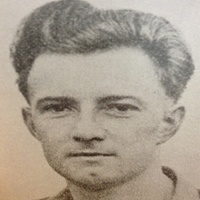 Dennis was born at the little village of Dennington, near Sheffield in Yorkshire, on the 22nd February 1928.

Whilst still at school he showed little interest in football, even being so close to those famous clubs – “The Wednesday" and "The United" although in those days he could hardly be expected to, as he came to Slough in 1933.

Ten years later he started his football career as a centre-half in the Slough Minors and was elected captain of his team in season 1945/46. For the next three he was in H.M. Forces having volunteered at the age of 17 for the Royal Navy, being drafted to the Far East.

Whilst serving he played at the centre forward position for the Base Team at Columbo. Back in civvy life in 1948, he had twelve months rest before joining the Centre F.C. as right back. The following season he joined the Town Club and was given a trial in the First Eleven after Christmas, but Dennis was not quite ready for the senior side. A season in the Reserves did him a world of good and earned him the position in the senior side which he made his own. He was considered by those who knew him as a first-class left back.

He played for the Minor League representative sides, G.W. Combination and Slough “B” versus Hilversum “B”. He is the holder of the B&B Senior Cup “runners-up” medal and the Reading Senior Cup medal.