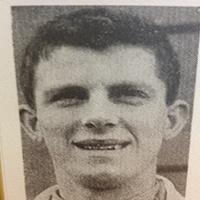 Former Slough Grammar School pupil who enjoyed two spells with Slough separated by a couple of seasons at Wokingham Town and Chesham United. Left-back who joined the club after more than five seasons of junior football.

Ges, a local boy, started, like so many Slough players, at Slough playing for the school side and for the schools representative XI. At that time he was a full-back but switched to centre-forward before he left school.

While playing for Granville Rovers in the Slough Youth League he also appeared in the Youth representative XI and from there joined Brentford Juniors, with whom he played for a season at centre and inside-forward. It was after this that Ges joined the Rebels for the first time.

After a couple of seasons in and out of the reserves, he got his big chance in the first team, towards the end of one season, at Edgware, but tragedy struck when he broke his leg and was out of action for 12 weeks.

The following season Ges established himself as a first-team player-on the left-wing-but the next term Len Townsend switched him back to full-back, only for Jimmy Price to arrive and move him back to centre-forward.

The next two seasons he spent at Wokingham, after recovering from a second broken leg, playing left-back behind Malcolm Scott and then returned to the Dolphin for the latter half of the season, making seven first-team appearances in the process.

Ges regained his first-team place and played as though he means to keep it. Married, with two children, Ges was a production manager with a local firm.