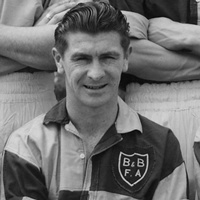 He moved to Slough in 1949 to earn money to send home. Instead he met his wife Margo and settled down. They lived in St Elmo’s Crescent their whole lives.

Jerry was a tool setter at the former Ideal Capsules Ltd factory in Farnham Road and worked there until he retired. Initially he played for Slough Centre, joining Slough Town in 1955, and he made his debut against Epsom. It took him until his third game to score his first goal against Yiewsley.

In 1957/58 Berks and Bucks won the Southern Counties Amateur Championship for the first time since 1924, beating Suffolk at Portman Road, Ipswich, 6-1. Jerry was one of the few players from Slough Town in that side dominated by Wycombe Wanderers. He impressed sufficiently that he was offered a trial for Ipswich by the future England Manager, Sir Alf Ramsey.

After finishing his football career in 1959, Jerry enjoyed travel and devoted the rest of his life to his beloved wife Margo and family of a son and daughter, five grandchildren and seven great-grandchildren.