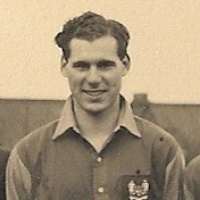 He was born John McVane Anderson on 21 February 1923, and grew up in Montrose, Angus, Scotland.

He played football and cricket for his school, The Montrose Academy, and later played for Montrose Football Club.

John joined the RAF at the age of 19 in 1942, and went on to become a Spitfire pilot during the Second World War. He was shot down over Italy, and had to parachute out as his plane caught fire, so became a member of the 'Caterpillar Club'.

In 1945, John left the RAF, although he retained his commission of Flight Lieutenant in the RAF Reserves, a rank he did not relinquish until July 1959. After leaving the RAF, John took a degree in Economics and then joined Cooper Mechanical Joints in 1948. He spent the first three or four years of his time with the company in Slough.

In 1951 John was promoted within CMJ and moved to Abergavenny. There were several more work moves before the family settled in Reading in 1955, where they remained. John and Betty had two daughters, Elaine and Janet. John continued to enjoy playing sport (hockey, cricket and golf) and had a life-long love of the game of football.

John sadly passed away in January 1988 at the age of just 64, after a heart attack. He is remembered as a wonderful father and grandfather, a good sportsman, and one of life's true gentlemen.