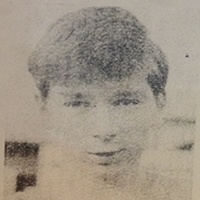 Enthusiastic goalscoring inside forward who came from Langley Sports and had an extended run in the first team in season 1963/64. Alan, who lived in Langley, was born in Paddington and came with his parents to Slough. It did not take him long to join a football team, and he spent half a season with Pathfinders before joining Langley Minors.

He went on to play for Langley in the District League, and became captain of the side, playing mostly at inside-forward, his favourite position.
Alan has played at inside-left, outside-right inside-right, and on the left wing on his few appearances for the first team

Despite this he has won county honours, playing twice for the Berks and Bucks Junior side in the Southern Counties Cup both times as centre-forward

Subsequently appeared regularly for the reserves, willingly filling-in for the first team when asked to do so. Alan was well on the goal trail with the reserves having scored 16 goals, including hat-tricks against Erith & Belvedere and Dorking. Also had spells with Windsor and Eton and Wokingham Town.