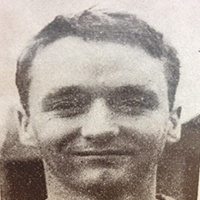 Right Half/Left Back Born in Wales but his parents moved to England when he was two.

Standing only 5’ 4”, he was already a very experienced player when he joined Slough from Uxbridge in the summer of 1964.

Regular right half in the championship winning side of 1964/5, his vision and astute reading of the game equipped him to be a good captain. He spent most of the 1965/66 season at left back.

John is one of the most experienced players in the side, and his 90 minute all-effort type of game has been one of the big factors in Slough's success so far. John has been converted into a most useful full-back by team manager Bob Gibbs. Many football fans who expect full-backs to be big hulking six footers must get a big surprise when they see 5ft. 5in. tall John Davies, but they get an even bigger surprise when they find that John plays the game good and hard giving and asking no quarter.

With John Delaney and Malcolm Scott he forms what must be the best half-back line the league. He was born near Cardiff, and moved with his parents to Slough in 1948. The Davies family soon left for Hayes however, where John lived with his wife and children.

John, despite his size, he is only 5ft 4ins, is a hard player as a number of clubs have found. He was with Uxbridge for five years, and before that played in Canada for two years, with Hamilton City, and with Yiewsley .

A number of London Clubs wanted him, when he was a youngster, but he settled for Chelsea & played for their Juniors.

He also represented Middx. Juniors, Southall and District Junior XI, and in recent months, the Athenian league 'rep' side.

John is now settled at wing-half, although he has often played at inside-forward and on the right wing. He was a sheet-metal worker and employed in Hayes.