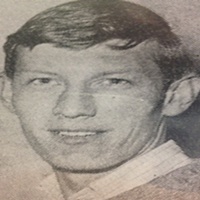 Centre Half. One of the all-time greats of Slough Town’s footballing history.

Another local lad who has graduated through District League football. John, came back to the Rebels at the age of 22 after a very successful season with Coopers, having joined the Premier Division side after only three matches with Slough Town as a goalkeeper.

John decided that he got no enjoyment out of playing in goal, although at one time it seemed that his future was "between the sticks".

After making a solitary appearance as a left half at the end of season 1962/63 had a brief, unsuccessful, spell as first team goalkeeper at the beginning of the following season.

After deciding that keeping goal was not his forte, returned in summer 1964 to become a commanding and inspirational centre half and eventually captain for the next five seasons.

Left for Wycombe Wanderers in summer 1969 in order to further his ambition to win an Amateur International Cap, which he duly did, playing 17 times for England.

Made 25 Football League appearances for Bournemouth during season 1973/74. Subsequently played for Hayes and Sutton United.

After leaving St. Ethelbert's School when lie was 15, John Joined Q.P.R., having impressed in the District Schools XI - under Bob Gibbs-and seemed likely to make soccer his career.

Unfortunately things did not work out as John had hoped, and after a season-and-a-half with the London Club, he left.

Back in Slough John played for the Black Horse in the District League and then had a couple of seasons with Horlicks before Slough and Coopers. He also plays Sunday football for the Naval Club.

John came to the Dolphin at the start of this season as a right-half, but because Wilks was unavailable for the first two matches, John Delaney played at centre-half - and he has never looked back.

He has improved with, every match and looks like keeping his place for a long time to come. John was a humourist himself. He waxed eloquently about beer in a straight glass and not in tankards. "Don't forget," he said, "to tell the supporters what a fantastic lot they are, worth a goal a game!"

True to character had he turned "pro", he would have liked it to have been Hartlepool. John was a store man by trade.