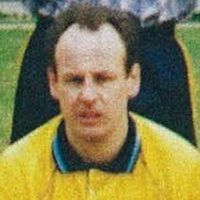 Les Briley was born in Lambeth in October 1956 and was signed by Millwall in a player exchange deal that took Andy Massey to Aldershot in 1984. George Graham enticed Briley to the Den leading by example, his tough tackling and excellent distribution making him a great favourite with the home fans.

He had begun his career at Chelsea, but moved on to Hereford United without once appearing in Chelsea’s senior side. He was transferred to Wimbledon for a record fee of £16,000 in February 1978 helping the Dons to avoid relegation and then helping them win promotion to Division Three. After this he moved to Aldershot with whom he made 170 appearances before joining Millwall.

Here he was a vital member of the squad that won the championship of the old Second Division in 1987-88. Les Briley completed seven seasons at Millwall and was presented with a silver salver to commemorate his 500 appearances in the Football League.

After a series of injuries he joined Brighton and Hove Albion before Slough Town Chairman, Alan Thorne, enticed him to Wexham Park, Slough Town being his final club before retiring from the game. His Millwall career saw him make 267 appearances for the London club with which he is still firmly involved and he currently manages Millwall’s successful U14 side.