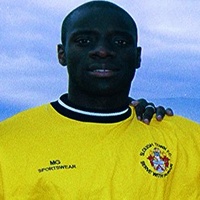 High profile signing ahead of the 00-01 season.

Left midfielder who had a host of professional clubs to his name was signed up by the Rebels following an impressive pre-season. Injury unfortunately blighted his time with Slough and he left the club in February 2001.

A former England under-21 international, he started his career at Oxford United in 1991, playing 181 games in five years, helping to send the club on their way back to the First Division in 1995–96 before he signed with Nottingham Forest for a £400,000 fee. He played 26 Premier League games for Forest, though played little part in the club's 1997–98 First Division promotion campaign. Instead he was loaned out to Luton Town and Third Division promotion winners Cardiff City, before he was allowed to sign with Port Vale in March 1999. His career diminished in brief spells with Stockport County and Brighton & Hove Albion, before he featured for non-league sides Dover Athletic, Aldershot Town and North Leigh. He retired from playing in 2010, having helped North Leigh to win promotion from the Hellenic Football League in 2007–08.

Allen started his career with Oxford United, and made his debut under Brian Horton in the 1991–92 Second Division campaign; he played fourteen games, helping the "U's" to avoid relegation. He made 31 appearances in 1992–93, as Oxford finished mid-table in the newly re-branded First Division. New manager Denis Smith played Allen in 45 games in 1993–94, though neither player or manager could prevent Oxford suffering relegation into the third tier. He played 36 games in 1994–95, as United missed out on the play-offs by six points. He played 24 games in the club's promotion winning 1995–96 campaign. Allen scored a total of 17 goals in 181 appearances in all competitions. Whilst at Oxford, he was capped twice for England at under-21 level.

He joined Frank Clark's Nottingham Forest on loan in February 1996, and made his Premier League debut on 2 March, in a 3–1 win over Sheffield Wednesday at Hillsborough. He scored his first top-flight goal a fortnight later, in a 1–1 draw with Middlesbrough at the Riverside Stadium, though would only make one further appearance in 1995–96. Allen moved to the City Ground permanently in the summer for a £400,000 fee. He then played 23 Premiership games in 1996–97, and also scored against Ipswich Town in the FA Cup; Forest were relegated at the end of the season. He appeared in just one league game under new manager Dave Bassett in Forest's 1997–98 promotion campaign, though appeared in both legs of the 10–1 demolition of Doncaster Rovers in the League Cup, finding himself on the scoresheet for the 8–0 triumph at Belle Vue.

Allen joined Lennie Lawrence's Luton Town on loan in November 1997, and played seventeen games, scoring once against Bristol Rovers at Kenilworth Road. He did not feature for Forest once his three month loan spell at Luton ended. Allen did not feature under either Bassett or Ron Atkinson in 1998–99, and was instead loaned out to Cardiff City in October. He appeared five times for Frank Burrows's Third Division promotion winning side. In March he was transferred to Brian Horton's Port Vale, playing five games, scoring once against Stockport County; the "Valiants" avoided relegation on goals scored.

Allen signed with Andy Kilner's Stockport County in October 1999, and played sixteen games in 1999–2000. He then signed with Brighton & Hove Albion, but did not make a senior appearance. He spent summer 2001 on trial at Cambridge United, but was not offered a contract. He signed with Dover Athletic in October 2001, after manager Gary Bellamy said that he "destroyed the opposition" in the three games he played on trial. He played 17 Conference games in 2001–02, as the "Whites" finished bottom of the table and were relegated into the Southern League.

He signed for North Leigh in 2006 and played with them until 2010. The "Yellows" were promoted out of the Hellenic Football League into the Southern League Division One South & West in 2007–08.

Allen returned to Oxford United in June 2010, when he was appointed as youth team coach.