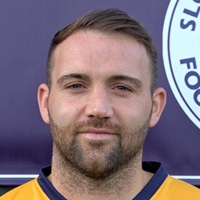 'Clurgy', or 'The Decider' as he likes to be called now, had a fantastic second half of the season in 2013/14. It took him a few months to settle at the club having moved in the summer from Godalming, however once he got going he was instrumental in getting the club promoted, with his work rate all over the pitch, and knack of scoring important goals, including the winner in the Play-Off Final at Kettering. He gets everyone else going in the side with his honesty on the pitch, but this can sometimes go unseen.

At 28 he is a hugely important member of the squad and for this reason, has been named interim skipper until Adam Foulser returns to the team.

He previously played under Jon Underwood at Bracknell Town, and has also represented Basingstoke Town, Wycombe Wanderers, Uxbridge, Staines, Fleet and Godalming. Jamie won the Players’ Player of the Season award at Godalming in 2011/12.