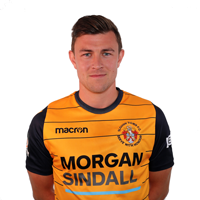 Rebels fans had bad memories of Chris after his hat-trick against Slough in the 2015/2016 FA Cup when playing for Basingstoke Town. He had been a regular goal scorer for the Hampshire side over the last couple of seasons, and even won National League South Player of the Month in the 2014/2015 season.

Chris then signed for Gosport in the summer of 2016 following Basingstoke's relegation, however he picked up a slight knee injury which required a minor operation and some time on the sidelines. He returned with four goals in five games before leaving Gosport.

The following season, he scored 24 times as Slough won promotion to National League South via the playoffs. Chris scored the equaliser in the final at King's Lynn Town before Manny Williams' late winning goal.