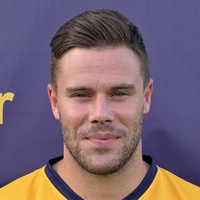 Adam Martin is a 23 year old central midfielder who is also comfortable playing on either flank.

After his release from Watford, Adam joined Berkhamsted Town where he became the Ryman League's youngest ever captain aged just 17.

He then signed for Steve Bateman's Hemel Hempstead Town, where he narrowly missed out on promotion via the playoffs. In the following season he captained the club aged just 19, and was taken on trial by Gillingham.

He joined Slough on loan in April 2010, scoring two goals in nine games as the Rebels lost out in the playoff final against Chesham United.

In July 2010 he left Hemel, signing for Conference South side St Albans for an undisclosed fee. He made 31 appearances before injury ended his season early.

Martin re-signed for Slough in August 2011 after having keyhole knee surgery in the summer. In February 2012 Adam went on to join Irish side Bohemians, taking up the opportunity of full time football. He also played in the Europa League first qualifying round, but his side was eliminated by Icelandic club Thór.

Following the conclusion of the 2012 Irish season, Adam signed forms to play for the Rebels again in December 2012.

Adam Martin rejoined the Rebels once again in Christmas 2014, having previously left the Rebels to join Wealdstone at the end of the 2012/13 season.