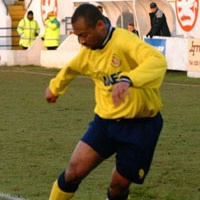 Initially joined on a loan deal from Reading as Slough began the season late in 1998 following the well documented problems which blighted the club and struggled to gel with his team mates during this twelve goal spell netting twice. His second spell was more successful as he replaced an out of form Michael Bartley and notched up fourteen goals in twenty three appearances. Roach was born in Reading and began his career as an apprentice with Reading, turning professional in August 1996. His league debut came on 26 April 1997, when he scored the first goal in a 2-0 victory home over Oldham Athletic. Despite this impressive start, he found it difficult to establish himself and joined Kingstonian on loan in January 1998.

In August 1998, out of favour at the start of the new season, he joined Slough Town on loan, scoring twice in 11 Isthmian League games. His debut goal for Reading turned out to be his only goal for the club, as he failed to find the net in four other starts, or 11 substitute appearances. In January 1999, Roach was told by Reading manager Tommy Burns that he was free to leave and began talks with Conference side Stevenage Borough. On 23 February 1999 he joined Wycombe Wanderers on loan, playing for their reserves the following day. This was to be his only appearance for Wycombe as on 26 February he joined Southend United on loan, with the move being made permanent on 3 March, costing the Shrimpers £30,000. He made his Southend debut on 27 February in a 3-0 defeat away to Cambridge United and scored on his home debut on 6 March as Southend beat Swansea City 2-0. Despite this start he found it difficult to keep his place and was loaned to Stevenage Borough.

In February 2000, knowing that he would be released at the end of the season, Roach was allowed to join Chester City on trial, followed by a further one-week trial at Scarborough in March 2000. Nothing came of the trials, and at the end of the season he was released by Southend, having played only five games. In March 2000 he was called up by the Cayman Islands for their World Cup Qualifiers, but flew home from Cuba after FIFA blocked Roach and six other British-based players from playing.

He returned to Kingstonian on trial, playing in a friendly against Reading on 1 August 2000, but nine days later had signed for Australian side Eastern Pride. In February 2001, with the demise of Eastern Pride, he returned to the UK, joining St Albans City, making his debut in the Isthmian League Cup tie at home to Hampton & Richmond Borough. He played six further times, scoring twice (both against Chesham United in the Full Members Cup on 20 February before joining Frickley Athletic in March 2001. On 22 March, within two weeks of joining Frickley, Roach left to join Oldham Athletic. He made only one appearance, as a second-half substitute for Carlo Corazzin, for Oldham, on the final day of the season, a 5-0 defeat away to Millwall, before being released.

In the 2001 close-season he joined Torquay United on trial, impressing manager Roy McFarland sufficiently to be signed on non-contract terms on 9 of August which allowed him to make his debut two days later on the opening day of the season, playing as a late substitute for Eifion Williams in the 1-0 defeat away to Bristol Rovers. He remained on non-contract terms for the next two months, leaving the club by his own choice in November 2001 to join Stevenage Borough. The following month he joined Slough Town on a match to match basis, but left the same month to join Basingstoke Town. The 2002-2003 season was a great success for Roach, he scored 25 goals, earned a trial with Football League side Boston United and won the Basingstoke supporters player of the year award.

In the summer of 2005, after scoring 62 times in 162 first team appearances, he left Basingstoke to join local rivals Eastleigh. In November 2005 he joined struggling League Two side Oxford United on loan, returning to Eastleigh in February 2006 after Oxford had signed two new strikers (Yemi Odubade and Tim Sills). Roach was transfer-listed by Eastleigh in October 2005 and spent the end of the 2005-06 season on loan at Maidenhead United, but returned to Basingstoke in June 2006. In January 2007, Roach returned to Maidenhead on loan from Basingstoke, extending his loan two further times, before signing on a permanent basis in mid-April.

He suffered a viral illness during the 2007 close season, and was loaned to Harrow Borough and then Farnborough in order to regain fitness. He was released by Maidenhead in October 2007 and joined Farnbrough, where he scored regularly before moving on to Uxbridge in January 2008. On 16 July 2008, Roach joined Didcot Town. In 2010, a knee ligament injury forced him to stop playing and so he moved into management, taking over Hartley Wintney in May 2010.