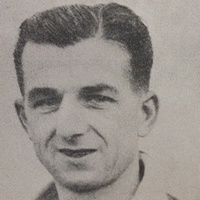 Born in Langley in October 1921, Ron will be celebrating his 31st birthday next Tuesday As a schoolboy he first plays for the Langley School where he was educated, and if they taught hint nothing else, they certainly taught him how to play football and he soon caught the selectors eye and was chosen to represent his school in the "Slough and District School Boys' team.

His first love, when he left school, was his native village, and as a senior he played for Langley, migrating to the Eton Vics, who have always been a power in the junior world of football. His next move was to the Windsor Works team, when the `Irons’ were a team to be respected and with whom many first-class amateur players started their football career.

Reaching senior status, he joined up with 'Slough United’ when they were members of' the Herts and Middlesex League and as a wing half was considered one of the best in the league.

When 'Slough United ' became disunited he remained for two seasons with the Centre Club but his heart was always with the Town Club and since he returned to us he has given yeoman service for the past three seasons helping us to win the League Championship in 1950-51, in which season he was the leading club goal scorer and carne a very close second to Alan King of Hounslow, in the League.

He has played in many representative games and has his Berks and Bucks County Badge. and but for an unfortunate injury---having broken a finger whilst fielding might easily have got his County Cap for cricket this year. For on his first appearance in the County side he scored 107 not out, but before the next match he had met with his accident.

Of the many centre forwards that have played for 'The Town', he is perhaps the most unassuming but can always be relied upon to give of has best and get that on expected goal that has so often turned defeat into victory.