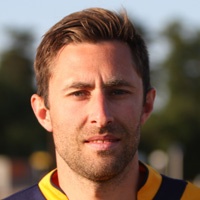 Versatile midfielder, capable of playing in the middle or on the right side of the pitch, signed by Steve Bateman from Chertsey Town in November 2011.

He made a further nine league appearances for Northampton Town before his career was cut short by a serious knee injury.

A move into non-league football saw Burgess reignite his career, and he has been a regular scorer from the middle of the park in recent seasons, with spells at Kettering Town, Nuneaton Borough, Corby Town, Brackley Town, and Hemel Hempstead, where he played under Steve Bateman and many of the current Rebels squad. He was part of the successful Corby team which won promotion to the Conference North.

He left Chertsey in the wake of former Curfews owner and first team manager Spencer Day leaving the club, having scored three goals at the start of season 2011/12.