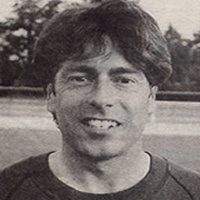 Experienced left back who joined the club towards the end of the 1996/7 season.

Quality addition to the squad who had also appeared for Portsmouth and appeared for Sunderland in the 1992 FA Cup Final as the north east side lost to Liverpool. Was one of only six players to remain with the squad following the problems in 1998 and took over the management position for a short time before being replaced by Graham Roberts as the new consortium looked to more high profile signings.

He is now youth team coach for his former club Portsmouth. Signed by Portsmouth manager Bobby Campbell when playing for Waterlooville, Hardyman made his debut in a 1–0 defeat to Crystal Palace wearing the number three shirt.

During the 1985–86 season also saw Paul represent his country for the second and final time at U21 level in the European Championship quarter-final against Denmark in Copenhagen. Although England returned victorious, Hardyman lost his place for the semi-final as Mitchell Thomas of Spurs (whom he had replaced) had recovered from injury. After this foray into International football, Hardyman was transferred to Sunderland for a fee of £130,000. Whilst at Sunderland, he played in the 1992 FA Cup Final as a substitute where they lost to Liverpool.

With his playing career over, Paul returned to his hometown and began work, alongside Guy Whittingham as a match day summariser on BBC Radio Solent. Until being made redundant by Portsmouth in October 2009 Hardyman, again together with Whittingham, Rod Ruddick and former Nottingham Forest winger Ian Woan, coached Pompey youngsters between the ages of 8 & 18.

Paul recently became manager at New Milton Town and is hoping to turn round the fortunes of the Sydenhams Football League (Wessex) club that has been through some rough times of late.