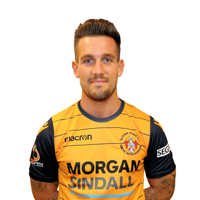 'Dobbo' joined the Rebels at the back end of season 2013/14 from North Leigh in time for the club's promotion-winning run in. He was a player that Neil Baker and Jon Underwood liked from his days at Burnham.

He is a quick 26-year old who has good work rate and a lovely left foot. He integrated well into the squad, and went on to make 46 appearances for the club, scoring 4 goals (with another two at Edgar Street expunged from the records after Hereford United were wound up).

James rejoined Slough in the summer of 2016 after having spells with Harrow Borough and Aylesbury. He felt he had unfinished business with the club, and started the 2016/17 season in fantastic goal scoring form. He maintained this form over the course of the season and won the Golden Boot award for top goalscorer, after netting 21 times.

He has picked up where he left off in the 2017/18 season, leading the goal charts early on finishing again with the golden boot.