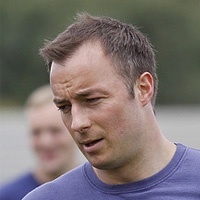 Versatile defender who returned for his fourth spell with the club after featuring in pre-season preparations for the 2011/12 season but left to join for Beaconsfield SYCOB after finding his opportunities limited.

Michael is capable of playing in any outfield position, but normally utilised at centre back, left back or wing back, and has a venomous strike with his left foot.

Michael was part of the Slough Town team that progressed to the Second Round Proper of the FA Cup and Fifth Round of the FA Trophy in season 2004/05, memorably scoring twice at Gravesend & Northfleet as the Rebels bowed out of the Trophy. He also won the Bryco (Isthmian League) Cup with Slough in the same season.

Michael was on the books of Reading as a youngster, and originally signed for Slough Town in the Conference days, starting out as a forward.

He re-signed from Windsor & Eton in October 2003, and returned for a further spell in 2007/08, helping out during a difficult time for the Rebels on and off the pitch, leaving the club after the resignations of then manager Darron Wilkinson and assistant Nick Roddis.

Michael has also played for RIPS Riihimaki in the Finnish League and for Ryman League sides Staines Town and Walton & Hersham.