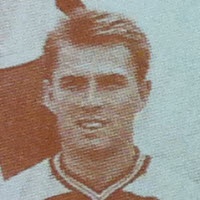 A former Bristol City player who has also non-league experience with Saltash United. Steve has represented the Combined Services and the Vauxhall League. Thompson joined the Royal Air Force from school and played for Saltash United in the Western League. He progressed to be a Fitness Instructor in the RAF, but continued his football career, joining Bristol City in July 1981 and making his League debut the following season. He joined Torquay United in February 1983 on a free transfer, but made just one appearance, as a substitute, before being released and rejoining Saltash United. In 1987 he was on the verge of joining Yeovil Town, but the RAF posted him to West London and he joined Slough Town instead. He joined Martin O'Neill's Wycombe Wanderers in February 1992 for a fee of £15,000 and was part of the Conference and FA Trophy double-winning side. The following season, Wycombe's first as Football League side, Thompson played in the victorious Division Three Play-Off final at Wembley. He moved to Woking in August 1996, winning a second FA Trophy winners medal and scored in Woking's surprise draw with Premiership side Coventry City in the FA Cup.

He joined Yeovil Town in March 1998, playing in the side while also acting as the club's fitness coach and working part time in the postal service. When Yeovil manager Colin Lippiatt resigned at the end of September 1999, Thompson took over, initially as caretaker, but was awarded the job permanently on November 10, 1999. In March 2000, David Webb took over as manager, with Thompson becoming player-assistant manager. He remained as assistant manager after Webb left, working under Colin Addison and Gary Johnson. Johnson left to manage Bristol City in September 2005 and Thompson was appointed as manager for a second time the following month. In May 2006, Thompson reverted to his first team coaching role at Yeovil and was replaced as manager by Russell Slade.