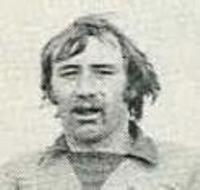 Legendary midfielder who holds the record for most number of appearances of any player in a Slough Town shirt.

Terry started off learning his football at both the Godolphin and William Penn schools. He gained representative honours with the Slough and District Schools team that used to attract massive crowds to the Dolphin on Saturday mornings. Represented the district side for four seasons and graduated to the county youth side when he was 17. At this time he was with Slough Boys' Club but he switched to Pathfinders for his last season as a youth. While with them he played for the Bucks Association of Boys' Clubs and was in the side which reached the final of the all-England county competition, losing 2-1 to Durham at Crystal Palace.

He went on to enjoy a long playing career as a hard grafting but skilful midfielder. Terry played for Yiewsley (who later became Hillingdon Borough), joining Slough after a couple of seasons, where he remained for four years. Terry, who comes from a well-known footballing family in Slough has had a trial with West Ham.

Then, after spending one season away, he returned to his roots to settle down at the Dolphin. He also played for Wycombe Wanderers, with a brief spell at Chesham, before going into management. He was a real local, making his first appearance for the club on 22 August 1964 in a home match in the Athenian League against Erith & Belvedere. He made an immediate impact, scoring twice.

In all, Terry scored 90 goals for Slough Town. His final appearance for the club came on 18 April 1981 in a 2-1 home defeat against Hendon at Wexham Park in the Isthmian Premier Division, as the club edged towards the end of a title-winning season. Amongst his goals were some vital strikes, including two from the penalty spot against Alvechurch at the Dolphin in a tough replay in the Amateur Cup in 1970 in front of a gate of 3,768 and in 1973, the clincher as Slough beat Blyth Spartans 2-1 in front of 3,500.

He also represented Slough in the 1973 Amateur Cup final defeat to Walton & Hersham at Wembley in front of a 41,000 crowd.

After retiring as a player, Terry returned to Slough in the capacity of manager and set about creating a good side consisting of local players. He famously masterminded the FA Cup defeat of Millwall in the 1982/83 season when in charge of the Rebels, the first time the club had beaten league opposition, with Gary Attrell scoring the winner.

Has represented the National Association of Boys' Clubs, Berks and Bucks F.A., England and Wales (the only man to be capped by 2 countries at amateur level) and Berkshire at cricket.

Outside of football, Terry worked as a plumber.